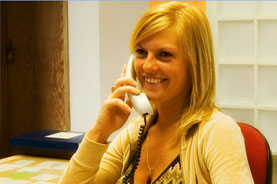 Customer is the most important. Its satisfaction is the main objective of the Company. In order to assure loyalty of our Customer, we improve processes which lead to the delivery of high quality goods within the time specified in the contract and for the price accepted by the market. 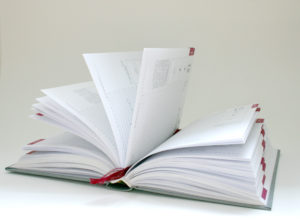 Almost 20 years of business activity of Silesian company Dar-Pol-Stal involves well-considered decisions and development of the company which in the hard times characterises with the nerves of steel and during the period of prosperity with the possibility of building an efficient enterprise on European scale.

Our main objectives are:

The owners declare that all the Company employees participate in the creation of the Quality Policy contents and at the same time identify with its objectives and respect the assumptions of the Quality System.

Our office and fleet 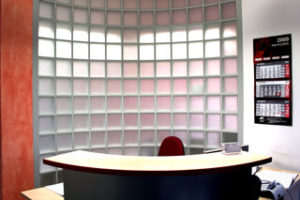 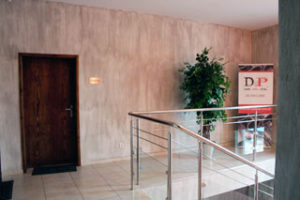 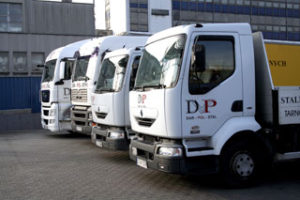 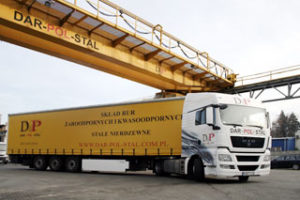 We have our own trucks adjusted for the transportation of metallurgical goods, we employ experienced drivers what leads to fast deliveries and high quality.

Tarnowskie Góry enterprise has been working based on the Quality Management System EN ISO 9001:2015 confirmed with a certificate for 20 years. 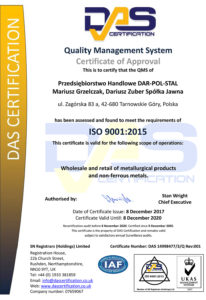 Two decades of business activity of Silesian company Dar-Pol-Stal is a sequence of well-considered decisions, it is a GIFT (Polish DAR) of predicting trends on the POLish market of metallurgical products and STEEL (Polish STALowa) consequence in the plans realization.

Created from scratch, the company owes its own business output to the prudence connected with ambition. Due to which it survived the hard times, did not yield to temptations, maintained peace when others made nervous movements, built its strength and value. The stable position of Dar-Pol-Stal on the market and organic model of the company development are connected with the characteristic for the area of Silesia features — common sense and pragmatism, reliability and solidity, responsibility and devotion to professionalism.

In the history of this one business enterprise, one can see a piece of a history of free market in Poland, the evidence for the success of Polish transformations. But it is also an example which reminds the impatient ones that creation of something that is durable takes time, work and imagination and the sceptic ones that honesty in business is profitable for everyone.

Proper timing and market intuition were in the case of the founders of Dar-Pol-Stal the impulse for establishing (in 1995) on the outskirts of industrial Silesia a company which dealt with trading and merchanting of metallurgical products. A few years later, Dariusz Zuber and Mariusz Grzelczak decided to extend the business activity of the company with import and export; the time to decide about serious investments which opened the new possibilities of the development has come. Product specialization has appeared (heat- and acid-resistant steel) accompanied with constant cooperation with the biggest companies of metallurgical, chemical and fuel industry in Poland.

Starting from the purchase of the first area for the purposes of building a warehouse in the home town of Tarnowskie Góry to the extension of the business activity with development industry, Dar-Pol-Stal has made a lot of investments; they were all responses to the market demands and realization of the market trends in advance; however, they always remained the consequence of the next stages of development.

On the first land purchased in the 90s of the previous century, a warehouse of metallurgical products was erected with the overhead crane with the load capacity of 5,000 kg. The subsequent years gave a strong basis for the activity development. In response to the increasing number of personnel and wider group of customers, the owners invested in an office and amenity and administration building as well as new storage areas in order to increase the comfort and effectiveness of servicing. Similar objectives — more strictly the will to be closer to customers — decided about the expansion to the north. The first company branch is opened in Gdańsk. The new location allows for improving the quality of relations with suppliers and recipients of products but also to develop trading contacts including international cooperation.

The first decade of the new century, Dar-Pol-Stal ends with the momentum — in the structure of company real estates the following objects in Tarnowskie Góry are found: a new amenity and administration office building, technical warehouse and steel storage yard. Opened in 2010, sales branch in Tarnowskie Góry (at ul. Kościelna 20) comprises a sales office and a roofed warehouse with the crane with the load capacity of 3,200 kg.

The element of the enterprise policy, which at the same time states about its competitiveness, is its independence from external means of transportation. Within a few years, the company has developed its transportation base which is made up of a few truck vehicles of wide load capacity range (starting from delivery vans with the load capacity of 3.5 tonnes to the truck with a trailer with the load capacity of 24 tonnes). Own professional forwarding services allow to assure the reliability of deliveries within the contracted time to our customers.

High standards of action on an uneasy steel market, business effectiveness and financial results being its consequences shall not remain unnoticed. The company from Silesia belong to the elite of Polish business due to prestigious awards and distinctions.

Dar-Pol-Stal five times becomes the winner of Business Gazelle competition being awarded by “Puls Biznesu” magazine for quickly developing and promising enterprises. The criteria for awarding the statuettes perfectly match the dynamic profile of the company from Tarnowskie Góry, which flexibly reacts to the market changes and which responds to the new requirements of its Customers. Let us remind that a Gazelle is, as wanted by the ranking organizers, a medium enterprise which successfully competes with much bigger entities.

The owners of Dar-Pol-Stal company have also been awarded with honourable Forbes’ Diamonds, titles given by the world famous business magazine (for the year 2009 and 2014). The jury before making a decision analyzed “hard” parameters of Tarnowskie Góry company: profitability, current financial liquidity, financial result and value of own capitals. Similar criteria decided about awarding Dar-Pol-Stal with the Business Reliability Certificate by D&B Poland analytical company. The honoured group involved only the economic entities with the highest note for stability. Dar-Pol-Stal has undergone a similar verification many times, what is confirmed by five certificates of business reliability.

Standards of action and investments of Dar-Pol-Stal received many prizes in the competitions on regional level organized by economic and local self-government. The management of Silesian company knows that the distinctions are forms of commitment and challenge for the future. In the interest of our customers, caring about reliability and gained recognition, Dar-Pol-Stal itself verifies standards of its actions by independent specialized entities. For 10 years, Tarnowskie Góry enterprise works based on the Quality Management System EN ISO 9001:2015 confirmed by a certificate.

The system is accepted by most demanding recipients way of confirming high competences of the supplier in terms of retail sale and wholesale of metallurgical goods, durability and repeatability of key procedures. The quality standard (with its updates – EN ISO 9001:2015) in the subsequent years was confirmed by the so-called recertification carried out by a renowned company DAS Certification and its representative DAS Polska.

Dar-Pol-Stal never compromises quality of products and quality of relationships with customers and suppliers. It involves thorough selection of suppliers so that the price to quality ratio of products offered was optimum. On the more and more competitive market of steel products distribution, it is the good contact with the customers and “added values” to the given product that decide about the success. The advantage of Dar-Pol-Stal is its personnel which is composed of high class professionals who offer not only advice while selecting the product, but also — what is not standard on the market — counselling services after the transaction. Competences, knowledge and experienced joined “in the package” make the product value rise and so Customer’s satisfaction. The importance of high qualifications of sellers who in Dar-Pol-Stal play the roles of customers’ advisors, are underlined by the company by means of investing in the education of employees, in their awareness of modern technologies and product lines.

Universally equipped warehouses make the customers do not need to wait for the ordered products but collect them on the spot. The strength of the company from Tarnowskie Góry is servicing realised by professionals with long-term experience. The special servicing centre was founded with the use of EU funds from the Regional Operational Programme of the Silesian Province. Due to work of people with band saws, pressing machine, guillotine, milling machine or lathe, the product obtains a precise form and features demanded by the Customer — without logistic and formal complications connected with the possible commissioning of the services to external entities.
Own professional logistic servicing allows assuring reliability of deliveries in the agreed time to the customers.

Dar-Pol-Stal is a company which is strongly and durably connected with the surrounding it operates in and which in a natural way is interested in long-term formation of responsible relationships with the social surrounding. Sports sponsorship on the highest national level has to be and is — in the reality of Upper Silesia — connected with football.

But a socially responsible company sees also the needs of people who are not as physically sound as football players. Dar-Pol-Stal uses available European funds in order to adjust its objects to the needs of people with movement disabilities and at the same time supports organizations connected with education and helping the weak and the disadvantaged.

In the unstable world, with the quickly changing conditions of business activity, it is worth to strengthen the stability through diversification. Bearing that in mind, Dar-Pol-Stal is expanding the portfolio of own business opportunities and experiences with the investments in real estate industry.

The idea of cooperation based on trust and reliability — in business or voluntary work — are the daily goals of the Silesian company and determine the high quality of its contacts with the social surrounding, labour market, but most of all, with suppliers and customers. In trade and services such a business credo is of economical dimension: good reputation is a precious part of the company capital and a satisfied customer — sooner or later — returns.

Sales enterprise DAR-POL-STAL Sp. J. is interested in mutual cooperation with all the recipients of its steel products.

We are looking forward to doing business with you! The management of DAR-POL-STAL.

This website uses cookies to improve your experience while you navigate through the website. Out of these, the cookies that are categorized as necessary are stored on your browser as they are essential for the working of basic functionalities of the website. We also use third-party cookies that help us analyze and understand how you use this website. These cookies will be stored in your browser only with your consent. You also have the option to opt-out of these cookies. But opting out of some of these cookies may affect your browsing experience.
Necessary Always Enabled

Any cookies that may not be particularly necessary for the website to function and is used specifically to collect user personal data via analytics, ads, other embedded contents are termed as non-necessary cookies. It is mandatory to procure user consent prior to running these cookies on your website.